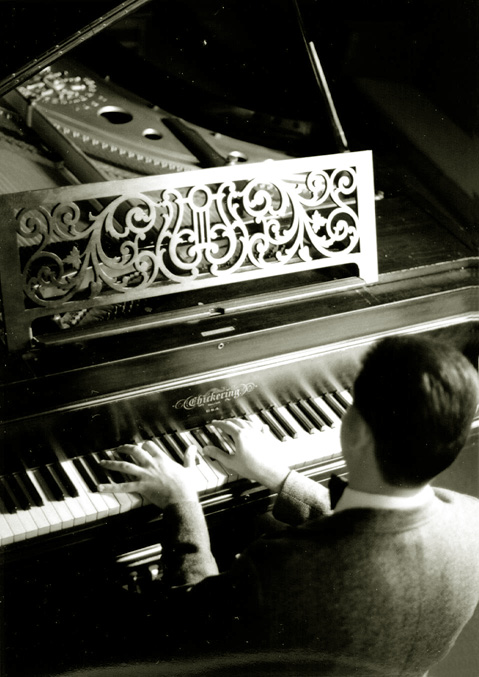 In a certain sense, the interpreter is a cooperator with the composer, or, more definitely expressed, he is the "continuer" along the line of the musical thought and its adequate expression.
When composers like Bach, Beethoven, Chopin, or Brahms put their thoughts down on paper, they left a record in ink and paper which must be born again every time it is brought to the minds of men

This rebirth is the very essence of all that is best in interpretative skill.

The greatest in interpretative ability is attained once an insight is gained into the nature of the composer's masterpiece by close and careful study of the work itself, by gaining a knowledge of the "musical laws" underlying the structure and composition of a work of its kind as well as the the necessary keyboard technic to give expression to the work.
Absolutely correct execution of a composition is theONLYfoudation upon which a really excellent interpretation can be built.

The pianist very often believes he must alter the musical notation of a composition, especially as regards rhythm. He often does so, because of a superficial reading capability, or because he thinks it is more interesting and "expressive" to play notes unevenly and strongly rubato, although the composer has written them all of equal value. Many of the audience may applaud such distortions, and this, unfortunately, applies to so many famous interpretations given by famous performers.

It is well-known the fact that every phrase has its climax, reached by an increase of the volume of the sound, while the reverse should take place from the climax to the end of the phrase.But, how many times we hear in Mozart Concertos inadequate terminations of phrases, taking away the naturalness of that music and gravely injuring the audience sense of proportions.

As far as the keyboard technic is concerned, I found that most of the technical work which is being done with infinite pains and waste of time is not only non-productive of expressive sounds, but actually
harmful and misleading as regards the development of the musical sense. I could see no object in practising evenness in scales, considering that a perfectly even scale is essentially devoid of musical or emotional significance.
Moreover, I could see no reason for trying to overcome what are generally called natural defects, such as the comparative weakness of the fourth finger for example, as it seems to me rather a good thing than otherwise that each finger should naturally and normally posses a characteristic motion of its own.

There is in all compositions a divine part and also a conscious part. The divine part is the inspiration. The conscious part has to do with dressing the inspiration in its most appropriate harmonic, polyphonic and rhytmic garments. These garments are the raiment in which the inspiration will be viewed by future generations. It is often by these garments that the artists are judged. If the garments are awkward, inappropriate and ill-fitting, a beautiful interpretation of the composer's ideal will be impossible. Nevertheless, it is the performer's duty in each case to try to see through even unbecoming garments and divine the composer's thought, according to the interpreter's best understanding